FOG stands for fats, oil, and grease. FOG is a byproduct from cooking. It comes from a variety of foods such as

FOG enters the system from various sources such as homes, apartments, restaurants, and other public facilities.

After FOG enters the sewer system it starts to accumulate on the walls of the pipes as it cools. After a while the buildup can become bad enough that it will start to restrict the flow of the sewer system which can lead to backups in the home or sewer overflow in the streets.  With any sewer backup that becomes an overflow, it can become a health hazard to the public and the environment because of the sanitary issue.

What can I do?

* Scrape as much residue, grease, and food scraps off of the pans, plates, and cooking utensils into the garbage. Install screens in the sink drain to help catch any debris that may go down the drain and the dispose of the debris in the garbage.

* Use a paper towel to wipe out remaining grease before washing.

* FOG can be poured into containers such as old coffee cans. When solidified, it can be thrown in the trash. 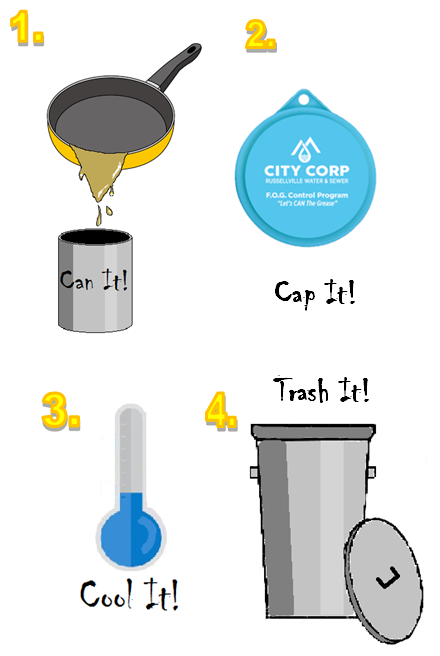 But I flushed it down the drain with hot water?

Although this can prevent it from accumulating in the pipes right away it will eventually cool down and that is where it will start to accumulate.

I use a garbage disposal?

I poured dish soap down the drain with it. It says it breaks up and dissolves grease?

While dish soap can help to break up grease in small amount most of the grease, oil, and fats are still there and will still be passed on the to the sewer system where they can accumulate.

The cooking oil was cool and still liquid when I poured it down the drain?

Oils float on top of the water and where they can adhere to the sewer pipes causing debris in the system to become trapped.

There are no upcoming events at this time.